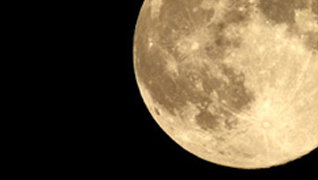 Tsukimi is ‘Moon Viewing’ on the night of the full moon on August 15th and September 13th of the lunar calendar. Offerings of pampas grass, rice dumplings, seasonal fruit and vegetables are made to the moon. They are placed on a stand set up on the veranda. The Japanese people enjoy the autumn evening by gazing at the moon in the clear sky.

Under the lunar calendar, twelve months were classified into four seasons as follows : January to March for spring, April to June for summer, July to September for autumn and October to December for winter. Therefore August is mid-autumn in the lunar calendar.

The origins of moon viewing are uncertain, but the practice came from China. It is said to have started in Japan at around late 8th century with the purpose to pray for eternal life and give thanks for ample harvest.

The story related to moon viewing is “The Princess Kaguya” reputed to be Japan’s oldest story and to have been written around late 8th century which coincided with the start of the moon-viewing practice .The story is about a mysteriously beautiful girl found in bamboo. She grew to be Princess Kaguya known far and wide for her beauty. She refused proposals from five aristocratic bachelors by setting each difficult task to do.

The story ends with a sad scene that contains the Princess Kaguya saying her farewells to the people on earth and leaving for the moon on the night of August 15th in the lunar calendar.:.

In Japan the pattern of the shadow on the moon is seen as rabbits pounding rice cakes. It is quite interesting to learn that the moon can be seen all over the world, but what the pattern on the moon looks like varies from region to region.

In some Western countries, the moon is believed to be connected to madness or insanity exemplified by the werewolf, but in Japan it signifies a time of harvest and healing. Surely, for many Japanese, the moon is something very friendly.

This year’s “chushu-no-meigtsu” will occur on September 25th and “nochi-no-tsuki” will be set for October 23rd. Last year, the former took place on October 6th and the latter was on November 3rd. Don’t miss the moon viewing chances this year! Mark your calendar!
Let’s enjoy Tsukimi!