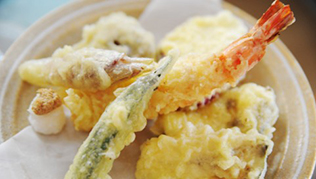 Among the Japanese foods popular by foreign visitors are tenpura , sushi and sukiyaki.
Tenpura is a variety of deep-fried foods or fritters. Shrimp, prawn, small fish, squid and vegetables are the main ingredients. (Watery foods such as cabbage and fruit are generally not used.) These are dipped in the batter of wheat flour mixed with egg and some water, and deep-fried in vegetable oil. They are eaten hot, dipped in a sauce (ten-tsuyu) made from soy sauce, sweet rice wine and fish broth, mixed with grated Japanese radish.

Variations:
Tempura is served with other foods. For an example, when served over soba (buckwheat noodles) or udon (white noodles), it is called tempura soba or tempura udon respectively. Tendon is cooked rice in a bowl topped with tempura shrimp and vegetables.

Tenpura2Fried food was introduced to Japan in the mid-sixteenth century by Portuguese missionaries. The fried food in early days was soft like fritter, and was developed into crisp food as it is today. The word tempura may be derived from the Portuguese word temperar, meaning to heat or harden in oil, or from the word tempero, meaning a condiment or seasoning. The restaurants specializing in tempura in Japan are called tenpura-ya and they range from low-priced fast food chains to very high-priced restaurants. Tempura is quite often served as part of a bento or a set meal.

How to Cook Tenpura Successfully