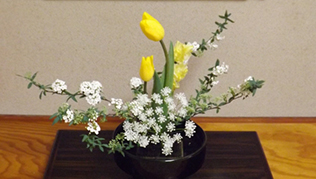 Ikebana is the aesthetic art filled with a spiritual significance influenced by Buddhism. The Ginkakuji Temple in Kyoto is the birthplace where this art was used in late 15th century to decorate the tea- room of the Temple. Therefore at early stage, it was closely related to the tea ceremony as a way of decorating the tea-room.

As Japan is blessed with clear-cut four seasons and plenty of seasonal flowers. It is quite natural that flowers had to be displayed artistically, but in a way they looked as close to their natural state as possible. This is the heart of ikebana.

Over the years, the form of the arrangement took on the symbolic meanings and many schools developed and various styles arose. Flowers can be arranged in the various styles. The best-well known is the “Heaven-earth-man” style which has triangular composition made of three basic branches. Fundamental techniques of ikebana include cutting of unwanted leaves, curving the materials, correcting kinks and so forth.

Today there are more than three thousand schools of ikebana, two of the better -known traditional ones being the Ikenobo school and the Ohara school. Since the end of World War II, an avant-garde school of ikebana like the Sogetsu school has appeared and lifeless materials such as iron, glass and the like are used to give an impression of life. The majority of the current ikebana are a combination of traditions and some modern elements.

In the past ikebana was practiced by young women as one of the social graces to be acquired before marriage. Nowadays ikebana as well as Western style flower design is enjoyed as a hobby in Japan. 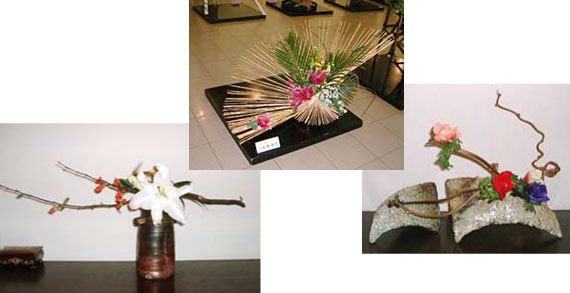