Furoshiki , the traditional Japanese wrapping cloth is single piece of a cloth. It has more than 1,200year-old history and had been widely used until the end of the Edo Period. The custom of using furoshiki dates back as early as the Nara Period (710-784) when it was used for keeping the valuables of the Emperors. The oldest wrapping cloth used in the Nara Period is in the safekeeping at the Shosoin (a wooden storage house at the Todaiji-temple in Nara). In the Heian Period (794-1185), furoshiki was used to wrap and carry clothes for the nobility. 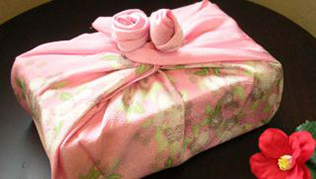 In the Muromachi Period (1338-1573) Shogun Ashikaga built a great bathhouse. It was a steam bath. The invited lords used silk cloth with their family crests printed in order to keep their clothes separate from others’ while taking a bath and hold them after finishing a bath.

In the Edo Period (1603- 1868) public bathhouses (sento) became widespread where furoshiki was used as a mat while undressing ,and a wrapping cloth to carry the clothes. The name of furoshiki is a combination of two words “furo” and “shiki” meaning “bath” and “to spread” respectively. Before becoming related to public baths, furoshiki had been called hirazutsumi or flat folded bundle. Finally, the furoshiki served as a means for merchants to carry their goods. Furoshiki became functional and essential to the working class in the Edo Period.

Furoshiki started out as the cloth in which people carried their clothes but later it came to be used to carry or to wrap almost anything of various shapes.

The modern furoshiki are made from variety of materials including silk, cotton, and synthetic fiber with designs depending on the use. The most commonly-used are furoshiki, squares measuring 70cm or 90cm wide.
Many people think unique to Japanese culture, but it has in fact been in many countries incluidng Korea where a patchwork wrapping cloth named Bojagi has been used for centuries.

Japanese people seem to wrap up everything from small items to bottles of sake. The tradition of wrapping or “tsutsumu” is easily seen throughout Japan. Wrapping of goods implies respects to others on the gift-giving occasion, then giving special meanings to wrapping materials and wrapped goods. The idea that giving someone an unwrapped item is considered impolite and deeply rooted in Japan. For an example, a tip given to a maid taking care of your room at a Japanese inn is wrapped in a small envelope.
The word “tsutsushimu” (to mean suppressing one’s feelings) characterizes partly Japanese people’s behavior. Such behavior is considered more important than speaking out candidly. It can be said that it is tantamount to wrapping one’s feelings and suggests that it is closely related to wrapping culture.

The number of the furoshiki users declined in the post-war period because of the popularity of the plastic shopping bags. Recently it has been reevaluated as awareness about environmental protection rises. Being compact when folded and good for reuse, furoshiki is the eco-friendly wrapping cloth. In 2006, the Japanese Minister of the Environment Yuriko Koike created a furoshiki named “Mottainai Furoshiki” as a symbol to promote its use. Its use is believed to contribute to reducing household waste from plastic bags.