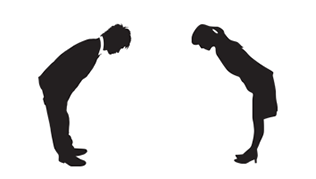 Introduction
Bows are more traditional greeting in Japan than any other East Asian countries.
Shaking hands is not common in Japan. The Japanese greet each other by bowing
Bowing is performed not only for greeting, but also for expressing different emotions including respect, apologies and gratitude. Bows are made in various traditional settings such as tea ceremony and martial arts. Bows are performed with the back straight and the hands at the sides, and with the eyes down. Bows form at the waist. Normally, the longer and deeper the bow, the stronger the emotion. Generally, an inferior bows longer and more deeply, and more often than a superior.
But since foreigners are not expected to know proper bowing rules, just nodding your head is usually sufficient.

Bows martial arts: Aikido, Kendo, Karate, Judo, etc.
Bowing is an essential part of traditional martial arts. Bows are conducted at the beginning and the end of the practice, and also when entering and leaving the dojo or practice room. This is the standard among practitioners in any country.

Bowing in tatami rooms
In tatami rooms, bow is performed by getting down on the knees and touching the palms to the floor. Such a bow can be frequently seen performed by the help at a Japanese style restaurant or inn to welcome the customers.